In my ‘previous’ life I used to be part of the Educational Dept. of the Archaeological office, one of the official bodies associated with the ministry of Arts and Culture in Rome (Italy).
Having studied Fine Arts at Uni and Medieval Art for my MA, I enjoyed the role given which allowed me to see a lot of sites in Rome which were closed to the public and/or open very rarely only to special delegations which needed a guide.  As such I used to research and prepare my talks in various libraries, where - once again - entrance was only allowed to ‘selected’ ones.  Oh, how I enjoyed that!

It was, during those two years that I got to know the Caracalla Bath (Thermae) [Caracalla because this roman emperor took over from his father – emperor Septimius Severus – in the completion of this grandiose opera, he gave it his name].
﻿
﻿

I will dedicate a post to describe the function and sequence of bathing in roman times.  In the meantime I will tell you about my experience of Turkish baths, Hamman and so forth in the XXI century.

Since living in Britain I learned and developed a love for being pampered.
And when I first visited Istanbul ca. 14 years ago, I studied my guide book to find things to do in the two ½ days off from my tour guide – [I had been told to visit this city only as part of a group as not safe for a woman alone, so I joined a tour organised by The Ramblers Holidays.  I found Istanbul a very safe and friendly city, easy to navigate and would not hesitate to go back on my own].

While perusing my guide book I came across a Hamman based in a very old roman building.  I believe the present Hamman occupies the area and perhaps shares part of the old roman baths.
After visiting this 'Turkish bath house' I was hooked.
This was a magical place to fully indulge and relax.  You entered, paid and would change into no more than a bathing suit and a small piece of cotton cloth wrapped around your waist.


Then you entered the Hamman inner sanctum and you found yourself in a semi large room full of steam and light filtering through from the ceiling.  You’d go to the side of the room where taps and small bowls are at the ready for you to douche yourself and take your position on the marble platform at the centre of the room.
The platform is heated from underneath.  Think of being at the beach, and replace the sand for a warm marble slab and the sun bright light filtering from the ceiling, and a warm steamy air around you.  When you reach the central platform you crawl your way over other ladies and reach the centre. Here you lie down, using your cloth as a towel and relax.  As you are doing so, you take stock of your surroundings and that is when I focused on the provenience of the light.  The domed ceiling is scattered with small round holes which are covered by thick glass, almost like bottle ends.  When is light outside and sunny (as often is) the light filters through the glass and illuminate the room/s.  Through the steamy air you see rays of light cutting the steam and touching a capitel or column, a body being washed, a tap... 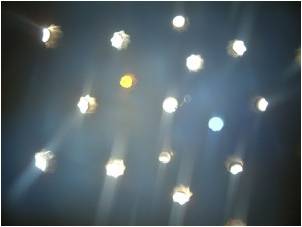 (Light filtering in the Hamman - www.hammamguide.com/).

After a while, you are drying and slowly starting to sweat and slowly you move towards the border of the marble platform and eventually you’ll be the next in line to be washed, scrubbed and massaged. The women (in this case) have sort of ‘pillowcases’ full of a local nicely fragranced soap which produces foam that is deposited on your body (have a look at the pictures on this site [http://www.virtualtourist.com/travel/Middle_East/Turkey/Istanbul_Ili/Istanbul-1837624/Off_the_Beaten_Path-Istanbul-hammam-BR-1.html]  to give you an idea).

The scrubbing is done with hands gloved with sort of loofah and it gets rid of all the dry skin cells on your body (so even if you have just showered, you feel very conscious of how much comes out while scrubbing!), then you get massaged, your muscles are kneaded and you come out a new person. Heaven!
At the end of the process (you get done front and back) the women take you to the outside edge of the room, and rinse you and give you a shower.  All this is done very gently in a relaxed and sometimes laughing atmosphere and in the end you are clean, relaxed and your skin reminds you of a baby’s bottom for its softness.  As you leave the steamy room you are led to a cool down area, with beds/reclining chairs, where you spend the next ½ hr or so chilling out, half asleep and sipping the wonderful mint tea they are so famous about.

When I first took a Turkish bath I was still working in the City in London and holding an often stressful job, and my first thought was that if they were to transport the Hamman to London I would be a regular frequenter, certainly every Friday after 5pm and possibly on other days too to ease the tension in the muscles!
Unfortunately the closest thing I found to the Turkish bath in London, was a long way away from the Istanbul ones and did not do the trick.
Ps. for obvious reasons I was not able to take pictures of the inside of the Hamman I visited, hence the links to pictures I could find on the net to give you an idea of what it looks like inside. (You might have to copy + paste the links to open them).