Do you fancy a local, good value for money day out?
On Monday a friend took me to Rye Mead Nature Reserve - RSPB centre in East Herts - to celebrate my birthday.
I have known of its existence for a while but never had the chance to go there.
We arrived late morning and only had to pay for the car park (£3.00 covers all day).
The centre has a small supply of snacks and drinks and you can sit eating them while watching the  bird feeding station. We had a quick look and were amused to see two Mallards stretching their necks to reach food which was at the centre of a metal cage and clearly meant to be off limits to them!

Rye Mead is a relatively small oasis of green for birds and people alike.
We ambled between hides, went back to the car to get some food to nibble along the way and continued bird watching. (Below the list of birds we saw on the day, a rather dull and wet-ish day).

Sometime ago I read on a local paper that Rye Mead is the home to breeding Bitterns. Unfortunately we didn’t see any, and I plan to go back there perhaps next February/March to see if I can spot them. I saw a Bittern before – a few years back at Minsmere in Suffolk – and I found it absolutely fascinating, they belong to the species of the Herons, which I happen to like a lot.

Rye Mead has also several sites ready to accommodate nesting Kingfishers. I have never seen one and was really hoping to finally catch sight of one this time.
We reached the hide overlooking the nesting wall set up for this elusive bird and, as we stepped in, we were told we had just missed it! Great!
We hanged around for a while, and the Kingfisher did not come reappear. Someone in the hide said that it could be another 2 hours before coming back… we decided to leave it for another time. 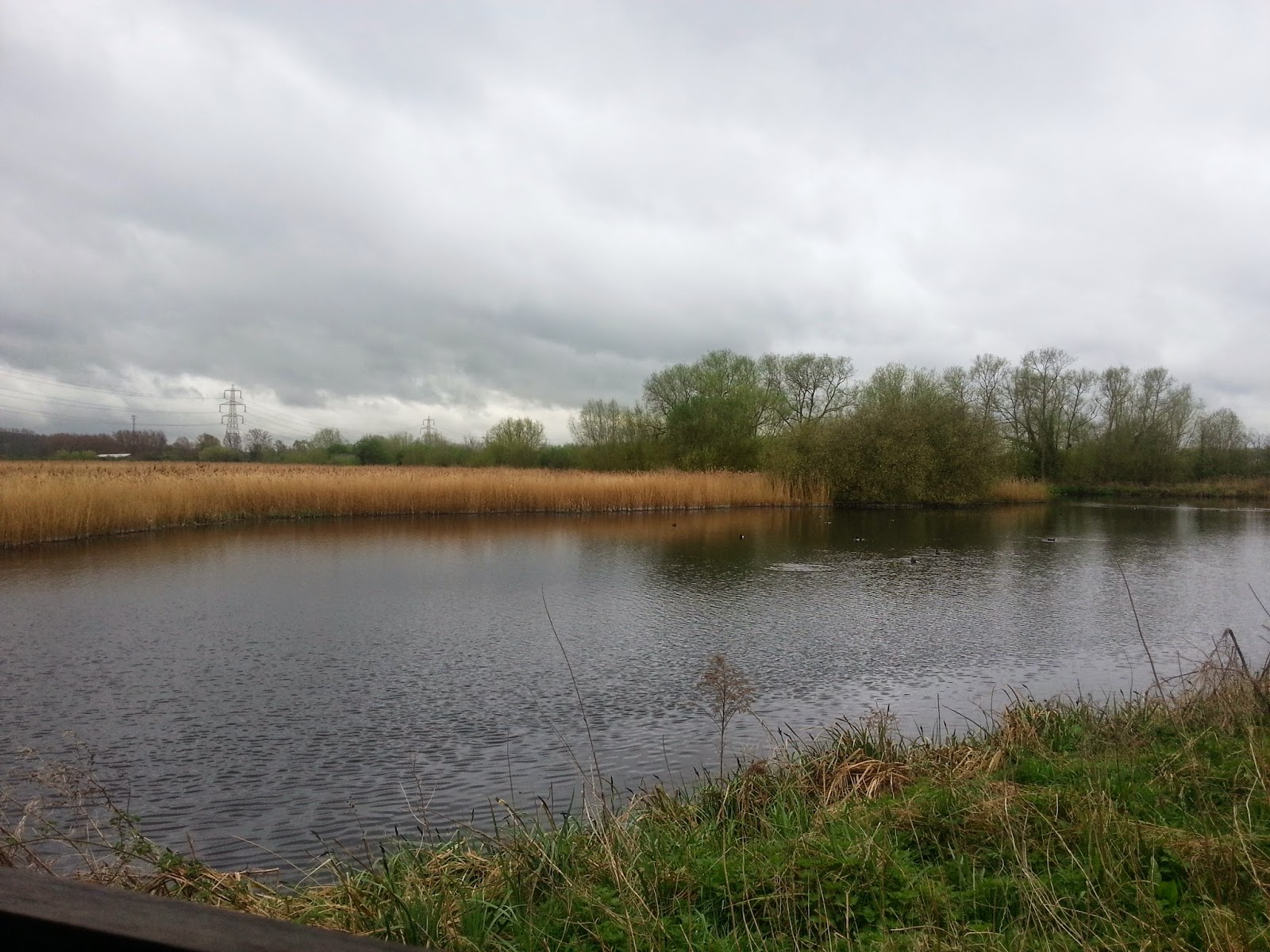 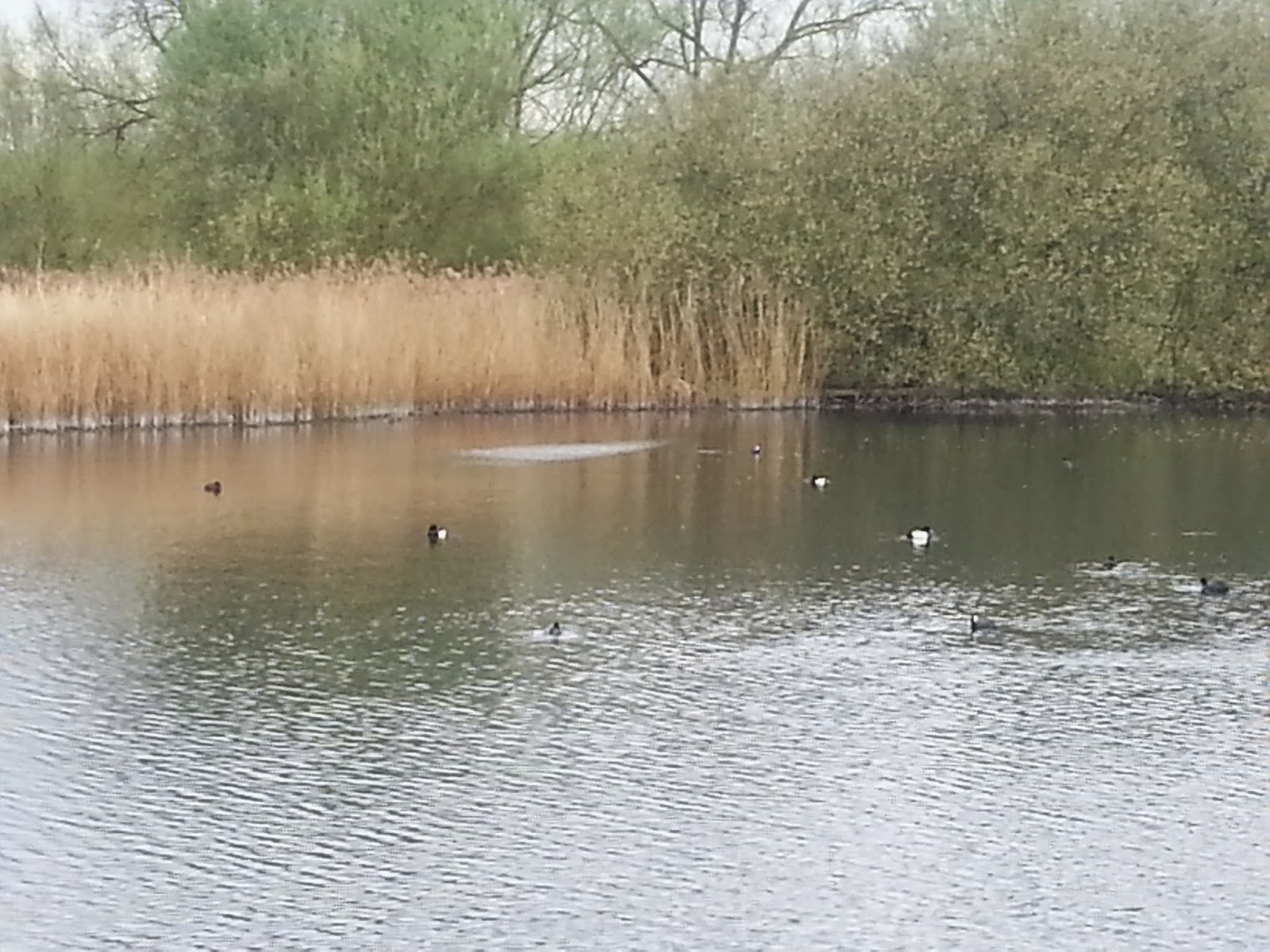 As we walked along the path, visiting the various hides, we reached one (the last before a one way turnstile) that was overlooking a kidney-shaped lake and this had the cutest family of coots with two chicks! The chicks were pretty young and their parents were diving and coming back to feed them and the young’s were happy not to follow the parents’ example and waited to be fed. 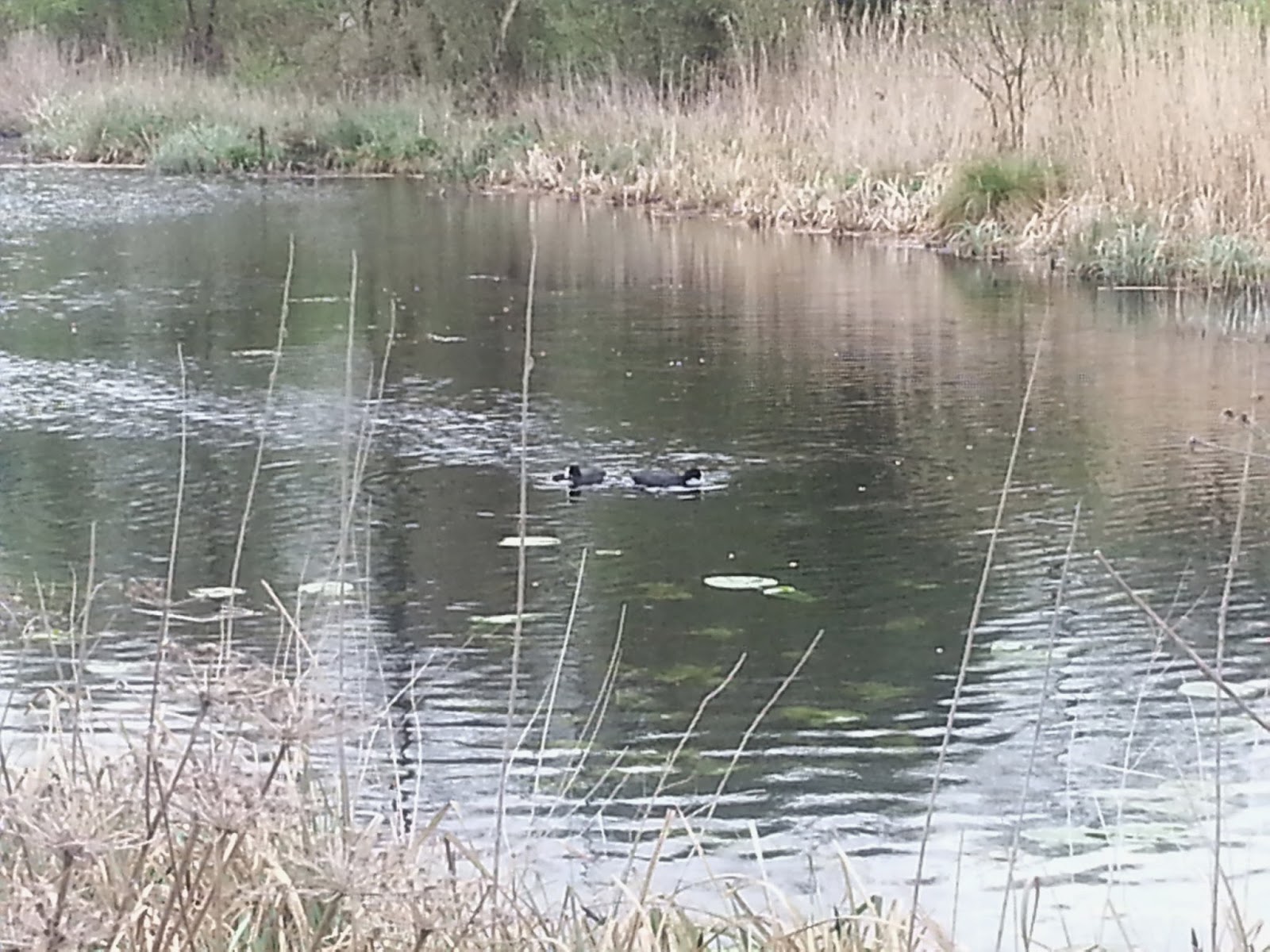 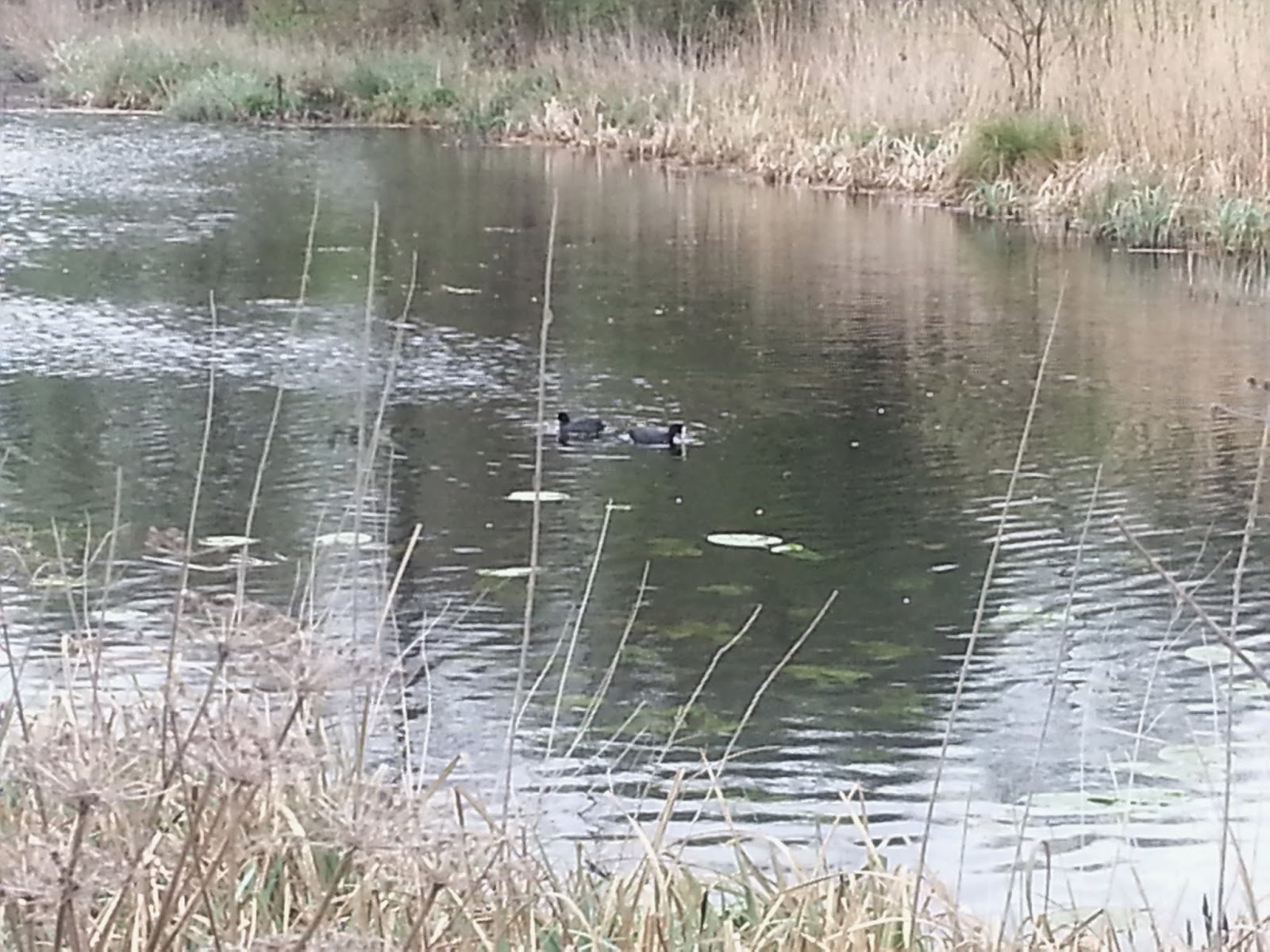 At the far end for a young lone Mute Swan and the other side some Pochards, with one of the male parading itself along in front of us. 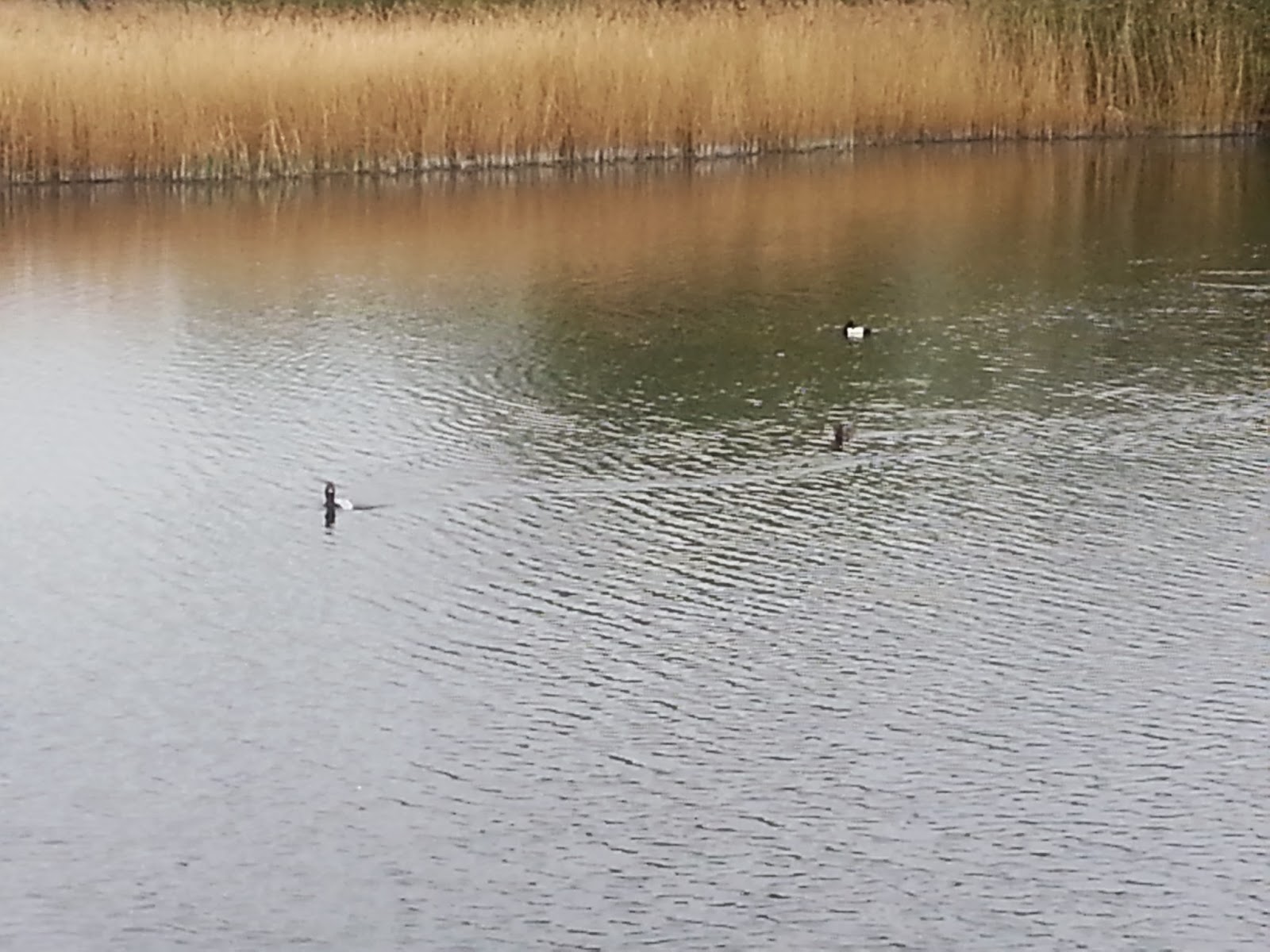 One of the great things as you went ahead in the Reserve was the utter quietness and stillness only broken at times by the birds.
Coots were nesting in the long reeds that gently moved in the breeze, Tufted Ducks were swimming unconcerned by the rain that at time was hitting the water in gusts.

Once ‘stepped’ over the ‘no-return’ turnstile, we walked along a level path surrounded by trees and blossoms, coasting the water.
What a fantastic place almost on our doorstep! We met nice people; a couple had driven down from South Cambridgeshire and were regulars to the site.  This is a place that it worth visiting regularly at different times of year in order to spot Otters and other seasonal birds and fauna.

This is the list of birds we saw on the day: 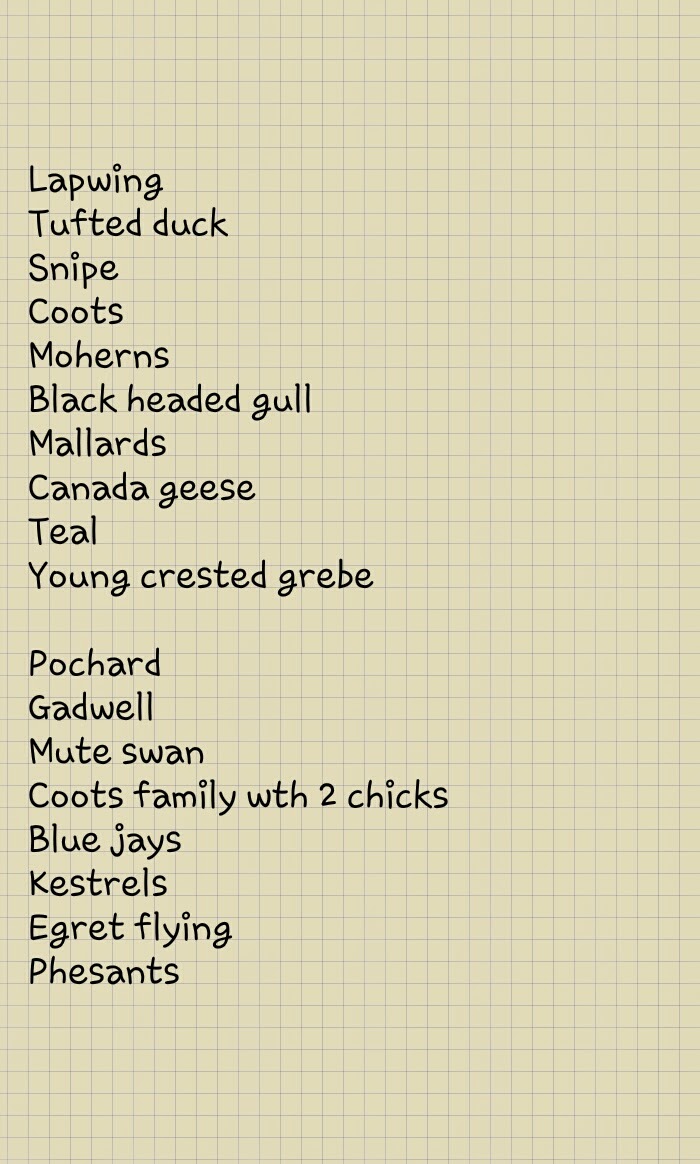 The Reserve is also very popular with children and schools are regularly visiting. The RSPB has informative posters and display areas that are aimed to kids.

Rye Mead is definitively a well worth knowing hidden gem.  We will be back… I want to see that elusive Kingfisher!
Posted by Unknown at 4:30 pm